The People of the British Isles Project is important and interesting, but in case you haven’t heard about it let me summarise. As the website states “The project has two purposes, the first to help medical research, and the second to shed light on ancient migrations within the British Isles.” On 19th March 2015 Nature Magazine published a peer-reviewed paper from the POBI Project. You can read the full article here. I was also fortunate to attend a lecture given by one of the authors of the paper, Garrett Hellenthal, who worked on the statistical analysis of the data. Hopefully this lecture will appear on YouTube. When it does I’ll post a link.

There has been quite a bit already written about it, so in this blog I just wanted to summarise some of the details from a genetic and historical perspective. 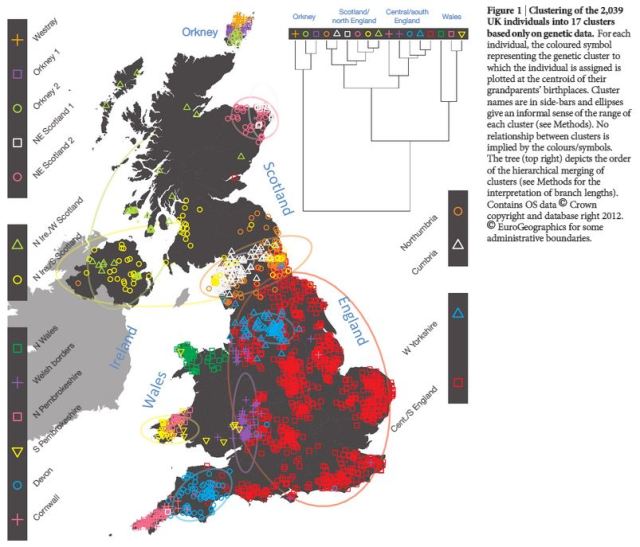 The POBI samples in 17 clusters, based on their genetic similarity. The diagram, top right, shows how the clusters break out from each other.

European ancestry of the 17 UK clusters.

This is mostly based on the POBI newsletter on the discoveries. As a refresher it’s worth reminding ourselves of the major historical events associated with the population changes within the British Isles. The POBI provided a handy image.

Major events in the peopling of the British Isles

[ Update 11-Jun-2015] If you have time you can watch (or mostly listen to] the talk Garret Hellenthal gave on the POBI project at WhoDoYouThinkYouAre?Live in 2015.

I hope this article is of interest. If you feel I’ve missed anything out please leave a note in the comments and I’ll get back to you.

This site uses Akismet to reduce spam. Learn how your comment data is processed.